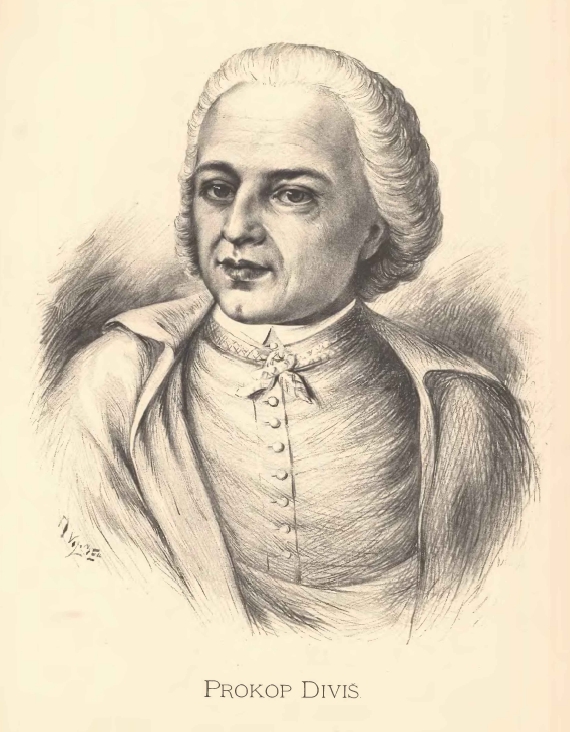 We tend to think of electronic music as a modern phenomenon, dating back only to the 20th century, but the invention of the first instrument made to use electricity occurred a couple centuries deeper than that. The man pictured above, Czech theologian and scientist Václav Prokop Diviš, “is now regarded as the earliest visionary of electronic music,” writes Motherboard’s Becky Ferreira, owing to the fact that “his dual interests in music and electricity had merged into a single obsession with creating an electrically enhanced musical instrument.” Around the year 1748, that obsession produced the “Denis d’or,” or “Golden Dionysus,” a “keyboard-based instrument outfitted with 790 iron strings that were positioned to be struck like a clavichord rather than plucked like a guitar.” Through the electromagnetic excitation of the piano strings, the monk could “imitate the sounds of a whole variety of other instruments.”

“Diviš was an interesting character, having also invented the lightning rod at the same time as, but independently of, Benjamin Franklin,” says the Cambridge Introduction to Electronic Music. He designed the Denis d’or with “an ingenious and complex system of stops” that reportedly allowed it to “imitate an astonishing array of instruments, including, it was claimed, aerophones.” The same applied to “chordophones such as harpsichords, harps and lutes, and even wind instruments.”

The term aerophone (which denotes any musical instrument that makes a body of air vibrate) might not sound familiar to many of us, but the functionality of Diviš’ invention will. Don’t we all remember the thrill of sitting down to our first synthesizer and discovering how many different instrumental sounds it could make, vague though the sonic approximation might have been?

Whether the Denis d’or counts as the founding instrument of all electronic music or a mere early curiosity, you can learn more about it at 120 Years of Electronic Music and Electrospective Music. The pre-history of electronic music (since its history proper begins around 1800) has remembered it as a practical-joke device as much as an instrument. “Diviš devised a novel method of temporarily charging the strings with electricity in order to ‘enhance’ the sound,” says the Cambridge Introduction. “What effect this had is unclear (unfortunately only one instrument was made and this did not survive), but it apparently allowed Diviš to deliver an electric shock to the performer whenever he desired.” Nobody ever said a polymath couldn’t also be a prankster.