And finally, here’s what Cormac’s interested in this morning

It’s an excellent time to look at the stock market performance of the lead characters in the global trade war before the G-20 summit in Osaka this weekend. U.S. stocks are at a record high and China’s shares are back in a bull market. Together they have added over $6 trillion in market value in 2019. 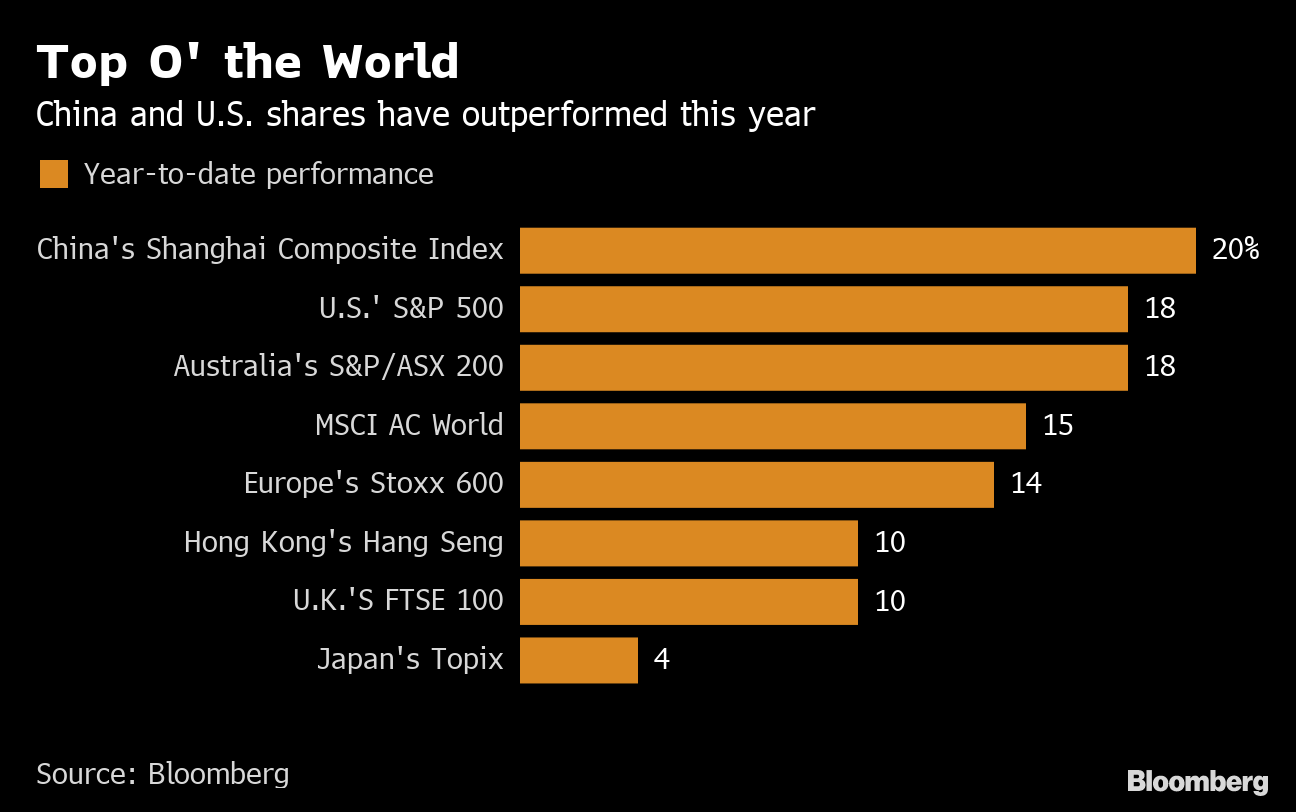 It hasn’t been all about trade. The inclusion of Chinese A-shares in MSCI indexes and policy stimulus has helped the Shanghai Composite Index rise 20% while a dovish pivot from the Fed has contributed to an 18% gain in the S&P 500 Index. Furthermore, according to Goldman Sachs, stocks are discounting just a 15% probability of a U.S.-China trade resolution—meaning traders aren’t expecting too much from the Osaka summit. Barring a complete breakdown in talks, this leaves the two stock markets poised to react favorably to any positive G-20 spin. At the very least, they’re unlikely to give up their world-beating crowns just yet.

And finally, here’s what Joe’s interested in this morning

The U.S. stock market is hovering near all-time highs, thanks in part to the dovish pivot from the Federal Reserve. While there wasn’t actually a rate cut last week, Fed Chair Jerome Powell did everything possible during his press conference to suggest that they were ready to ease. There was, however, one tiny line that jumped out at me as not quite fitting in. In response to a question about how far the economy is from full employment, Powell said: “You know, we have to be closer, because more jobs are being created than people are entering the labor force.” The implication is that there is still some useful notion of “full employment” that we’ll reach one day, and then wages and inflation will start shooting higher. Even after years of underestimating how low unemployment could fall, there hasn’t been a real questioning of the notion that the level must exist somewhere. It’s not a matter of whether the level exists, but rather where it exists. And as long as that’s the view, then the Fed may eventually return to a hawkish posture, even if inflation is mild, simply on the view that the unemployment rate is getting too low. On that note, you should check out the bottom half of this piece from Skanda Amarnath, which argues that rather than seeing full employment as a destination (a specific number), the Fed should perhaps be more concerned with the speed of employment growth as a possible driver of inflation. 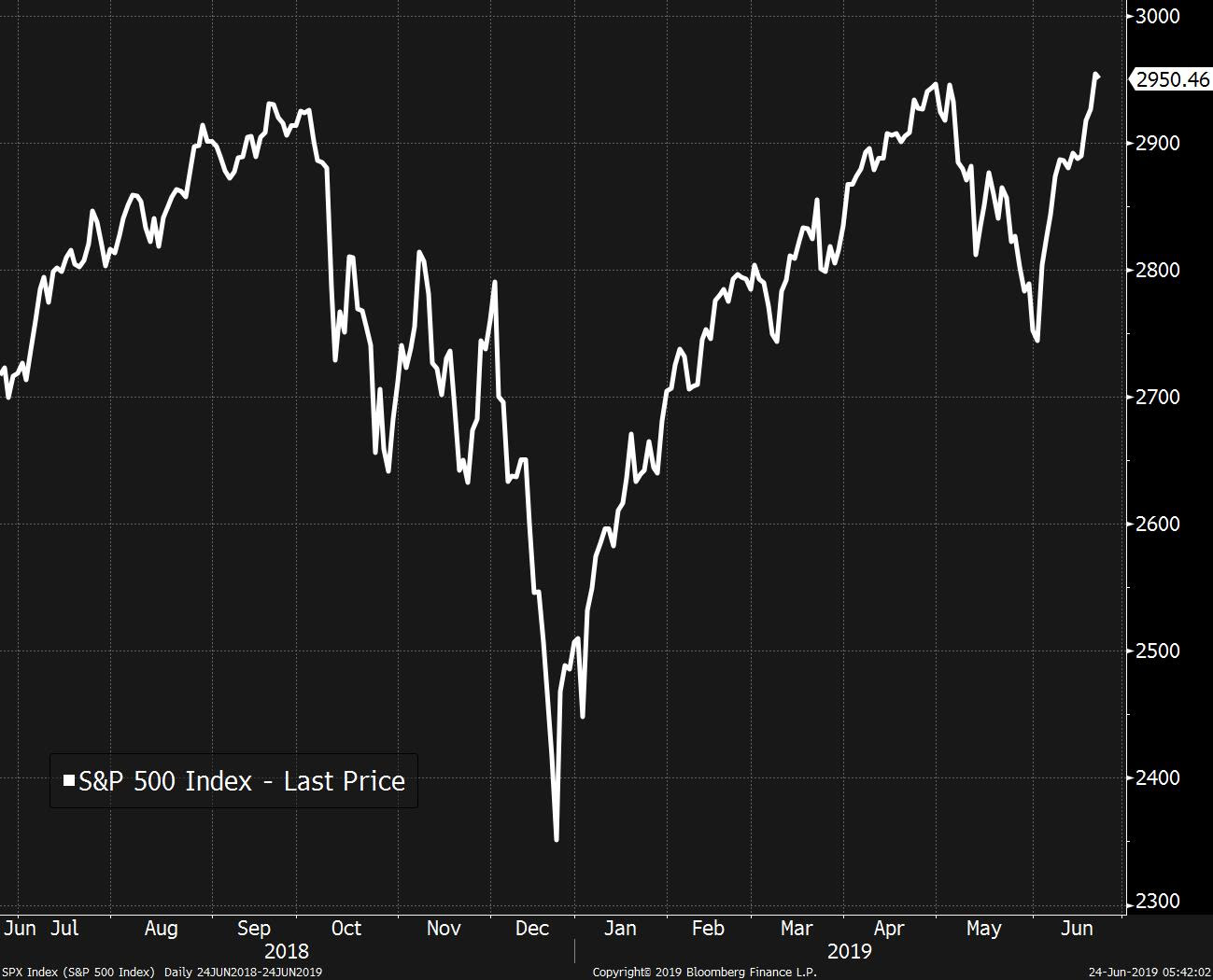 Trump sanctions Iran’s supreme leader in a provocative move. Fund managers aren’t holding their breath for a Trump-Xi deal. And SpaceX will try to pull off its most ambitious launch yet. Here are some of the things people in markets are talking about today.

Donald Trump imposed additional sanctions on Iran, including against supreme leader Ayatollah Ali Khamenei, in retaliation for last week’s downing of a U.S. drone. The restrictions would deny Khamenei access to financial resources, as he’s “the one who ultimately is responsible for the hostile conduct of the regime,” the president said. Analysts called the move largely symbolic, and Tehran said the new penalties won’t force it to negotiate or capitulate. The hard part will be getting Iran and the U.S. to talk to each other. Trump also blasted China, Japan and others over money the U.S. spends to defend oil tankers in the Persian Gulf.

Fund managers don’t expect much progress to be made at this week’s meeting between presidents Donald Trump and Xi Jinping, and they’re sticking to their positions. Most China investors see little chance the two leaders will suddenly reach an agreement and resolve a trade dispute that has weighed on markets over the past year. Most are keeping an emphasis on domestic-focused defensive stocks, though much potential downside is already priced in, while foreign-exchange traders expect a slight weakening in the yuan.

Asian equity futures are slightly lower after U.S. stocks edged away from records as expectations for easier monetary policy vied with concerns about a slowing global economy. Treasuries gained, while the dollar fell against every G-10 peer. WTI crude rose, and gold extended its advance above $1,400. Bitcoin surged above $11,000.

Oil’s outlook could be even bleaker than expected. While the Saudi Arabian-led efforts to restrain supply amid surging North American shale production have hogged headlines, a sense of malaise is quietly creeping across Asia. OPEC and its allies would be advised to pay close attention as they prepare to make a key decision on output curbs early next month. With the U.S.-China trade war now almost a year old and showing no signs of ending, its impact is manifesting itself in everything from profit warnings by Japanese car makers to sagging Chinese diesel consumption.

SpaceX will try to pull off its most ambitious launch yet later today. The mission for the U.S. Air Force is to deliver 24 satellites to space on boosters that are being reused after having flown in the past. SpaceX will carry the two dozen spacecraft into three distinct orbits. Having done so, it will then attempt to land the two boosters back on earth simultaneously and the first stage of the rocket on a drone ship in the ocean about 770 miles away from where it initially takes off.